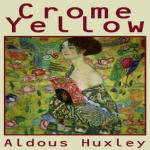 "Crome YellowHuxley's first novelis famous for its technique, ideas, and
acute psychological descriptions. As such, it ranks alongside Antic Hay, Eyeless in
Gaza, and Point Counter Point."The Times

"Robert Whitfield's unabridged reading of Huxley's first novel is a triumph of one man's vocal capacities
.Whitfield's vocal acrobatics in portraying the cast of characters assembled at an English country
estate for a summer vacation in the 1920's makes for dazzling aural entertainment. Otherwise fatuous
goings-on become intriguing shenanigans, and the characters' psychological portraits are rendered
accurately through the unique voices Whitfield assigns them. With each change of the five cassettes,
the listener is more captivated."AudioFile

One of the greatest prose writers and social commentators of the 20th century, Aldous Huxley here
introduces us to a delightfully cynical, comic and severe group of artists and intellectuals engaged in
the most free-thinking and modern kind of talk imaginable. Poetry, occultism, ancestral history, and
Italian primitive painting are just a few of the subjects competing for discussion among the amiable
cast of eccentrics drawn together at Crome, an intensely English country manor.