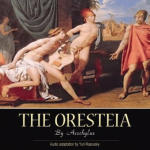 "The Oresteia is perhaps the most unusual tragedy in the theater
of the West and certainly one of the very greatest."-David Grene, University of Chicago
scholar and noted translator of ancient Greek texts

"The greatest achievement of the human mind."-Algernon Charles Swinburne

"In this terrifying masterpiece of his last years, Aeschylus passed through tragedy and
out onto the other side: to a Divine Comedy of the stage."-C. J. Herington,
Reader's Encyclopedia of World Drama

The only complete trilogy to survive from the ancient Greek theater is presented here in
the first sound recording of all three plays: Agamemnon, The Libation Bearers,
and The Eumenides.

In The Oresteia, Aeschylus dramatizes the myth of the curse on the royal house of
Argos. The action begins when King Agamemnon returns victorious from the Trojan War only
to be treacherously slain by his own wife. It ends with the trial of their son, Orestes, who slew
his mother to avenge her treachery-a trial with the goddess Athena as judge, the god Apollo
as defense attorney, and, as prosecutors, relentless avenging demons called The Furies. The
results of the trial change the nature of divine and human justice forever.

Also included is an excerpt from Blackstone's dramatization of The Odyssey, in which
Agamemnon's brother Menelaus learns of the events of The Oresteia from Proteus, the
sea god.