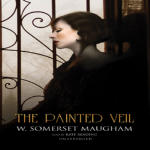 "The Painted Veil, with its sadness, its moral tension, its irony
and compassion, its building evocations of lust and terror and remorse, is a work of
art."Spectator

"[Maugham is] the modern writer who has influenced me the most."George Orwell

First published in 1925, The Painted Veil is an affirmation of the human capacity
to grow, change, and forgive. Set in England and Hong Kong in the 1920s, it is the story
of the beautiful but shallow young Kitty Fane. When her husband discovers her adulterous
affair, he forces her to accompany him to a remote region of China ravaged by a cholera
epidemic.

Stripped of the British society of her youth and overwhelmed by the desolation around her,
she is compelled by her awakening conscience to reassess her life. She takes up work
with children at a convent, but when her husband dies, she is forced to return to England
to her father, her one remaining relative, to raise her unborn child. Though too late for her
marriage, she has learned humility, independence, and how to love.