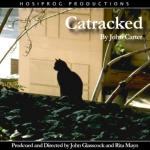 This was going to be a bad hair day for Julie. The only thing that can bring her comfort and get her through the day is her CAT. Problem is the beast had friends down the road who feed him. Result a stuck cat in the cat flap. What follows next develops into utter farce.

No animals were mistreated during the recording of this production
- Only humans.