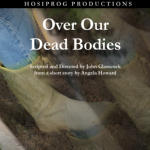 Over Our Dead Bodies

If you want to create a tangled web, it isn't always neccessary to PRACTISE to deceive.

Here, an off-the-cuff white lie about a smear of blood and a garage door leads two young twins to alarming assumptions about their well-meaning but not entirely blameless father.

We should like to pay particular tribute to Jean Donald for taking over the part of Paula with only one rehearsal. Happily, Rose Butcher, who was not well enough to record, should be back with us for future productions.