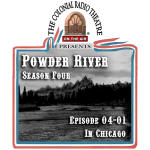 Narrator : The Colonial Radio Theatre on the Air