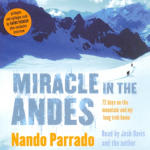 Miracle in the Andes

On 13 October 1972, the members of a top Uruguayan rugby team were flying over the Andes to play in Chile. Their plane crashed into a mountain and was stranded 11, 000 feet up on an inhospitable glacier. Many died instantly in the crash, including the person sitting next to Nando , but others survived. They had almost no food or suitable equipment to withstand temperatures as low as -35C, and had to eat the bodies of their dead team-mates to survive. With the prospect only of a slow death, and no rescue likely, Nando and one of his friends set off on an impossible journey, walking and climbing for ten days in search of help. Finally, after 72 days, the 16 survivors were brought to safety.

Parrado's hugely inspirational tale shows how the strength of the human spirit, the close bond of friendship and faith can make you achieve the impossible. He explains how, once you realise that you must surely die, no risk becomes too great.

Prologue and epilogue read by Nando Parrado plus an exclusive 20-minute author interview
' Fantastic - it's the most emotional book I've ever' read. It's going to be the book of 2006 ' Sir Jackie Stewart

Nando Parrado, after surviving the Andes plane crash, has gone on to become a successful businessman and television producer and presenter. He speaks five languages, is a hugely successful lecturer around the world, and in his spare time races motorcycles and stock cars.