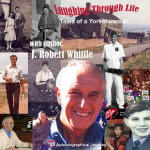 Laughing Through Life: Tales of a Yorkshireman

Yorkshire, England, produced this ambitious lad in 1933 and he filled his early life with farm chores, county and professional cricket, and the dangerous life of a mining engineer heading a disaster team. A spunky kid, he was a hard worker who stood up for the underdog and thus was always getting into trouble of one sort or another... but there were many laughs as well - his mother claimed he was laughing from the minute he was born!

Moving to Australia to start a new, less arduous life, he worked in the Aussie desert, then moved to Baffin Island in the Canadian North before finally settling in Victoria, BC in 1971. He was not to know that until he became a senior would he find a new calling as a bestselling author of historical novels loved by all ages. Many of his international readers discover him at his market stand in downtown Victoria, British Columbia six months of the year during its heavy tourist season. He is often told to go home and write more books!

This audio book was produced as a direct result of the many people who requested him to write his autobiography. Many of his stories relate to his life as a young entrepreneur in Yorkshire. His Lizzie Series is loosely based on this busy young life.