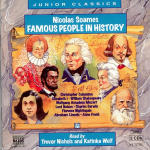 Here are the stories of nine people whose energy, imagination, courage and determination changed the world. From Christopher Columbus who set off into unknown seas in a small ship in the 15th century, to a young girl, Anne Frank, caught in the turmoil of the 20th, who wrote a remarkable diary while in hiding in Amsterdam during the Second World War. Their personalities and their achievements make them heroes and heroines for our time also.