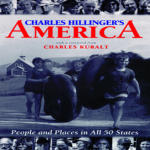 Charles Hillinger's America: People and Places in All 50 States

"Charles Hillinger's America is not the crisis-ridden, argumentative, highly
politicized country that we read about on the front pages. It's much more neighborly and much
more interesting than that. If you ask me, it's much truer to our real lives, too. If some historian
of the future wants to know what we Americans were like in the second half of the twentieth
century, he'll find us in this book."--Charles Kuralt, from the foreword to the book

This collection is the fruit of Hillinger's nearly forty-six years of a dream job spent traveling the
United States as a feature writer and columnist for the Los Angeles Times. The result
was 6,000 human and general interest stories. He traveled, came home to write, and hit the
road again.

In Charles Hillinger's America, you will learn about Thomas Edison's first motion picture
studio, built in New Jersey; about the only surviving wooden whaling ship, in Connecticut; about
the place in West Virginia where someone actually built a mountain out of a molehill; about the
hauntingly mysterious mural in Utah known as the Great Gallery; about why Minnesota is the
looniest state in the lower 48, and why firemen from America beat a steady path to Ponce,
Puerto Rico.