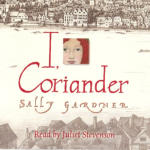 I am Coriander Hobie.

I was born in the year of Our Lord 1643, the only child of Thomas and Eleanor Hobie, in our great house on the River Thames in London. Of my early years I remember only happiness. That was before I knew this world had such evil in it, and that my fate was to be locked up in a chest and left to die.

This is my story. This is my life. I looked back into the bedchamber. The floor had become a sea and the bed a ship, seen from a great distance. I could hear voices calling me from Jar away. It was an image that came to haunt me, and I have often wondered what would have happened if I had done as I was told and left the silver shoes alone.

Sally Gardner was an award-winning costume designer for the theatre before realising her ambition of writing and illustrating children's books, which she now does full-time. She lives in North London with her three children.

Ranked among Great Britain's most esteemed stage actresses, Juliet Stevenson also lends her talent to film and television productions. A graduate of London's Royal Academy of Dramatic Art, she first made waves in classical theatre in the early '80s. Her most acclaimed film role was in Truly, Madly, Deeply (1991). Aside from starring in such films as Nicholas Nickleby and Bend It Like Beckham , she is a very experienced reader of audiobooks, having read