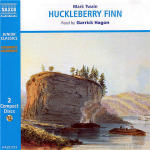 Floating down the Mississippi on their raft, Huckleberry Finn and Jim, a runaway slave, find life filled with excitement and the spirit of adventure. Join Huck and Jim and their old friend Tom Sawyer as they come up against low-down thieves and murderers, whilst being chased by Huck's evil, drunken father who is after Huck's treasure. It is a trip that you will never tire of.

Garrick Hagon has appeared in many films including Batman, Star Wars, Cry Freedom, Anthony and Cleopatra, and Fatherland. His television credits include A Perfect Spy, The Nightmare Years, Henry V, The Chief, and Love Hurts. On London's West End he played Chris Keller in All My Sons, and he is a frequent story reader for the BBC. He also reads The Adventures of Tom Sawyer and The Call of the Wild for Naxos AudioBooks.