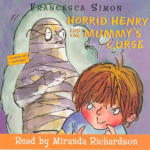 Horrid Henry needs to complete his Gizmo collection, so he brings the supermarket to a standstill while looking for the rare Gizmo in all the cereal boxes. He devises what he thinks will be a foolproof method of getting through a spelling test, only to find himself having to learn how to spell the hard words next! He then adds excitement — and terror — to the class swimming day. Finally, he frightens Perfect Peter away from his brand-new deluxe 'Curse of the Mummy' kit.

Miranda Richardson has appeared in films such as the Academy Award and Golden Globe winner The Hours, Sleepy Hollow, The Crying Game, Empire of the Sun and Spider . Television work includes A Dance to the Music of Time, Jackanory , Queen Elizabeth in Blackadder and Queen Mary in The Lost Prince . Stage plays range from Old Times to The Changeling .