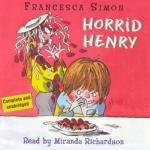 Four hilarious stories with amazing music and sound effects.
Henry is dragged to dancing class against his will; vies with Moody Margaret to make the yuckiest Glop!; goes camping in France and tries to be good like Perfect Peter - but not for long.

Miranda Richardson has appeared in films such as the Academy Award and Golden Globe winner The Hours, Sleepy Hollow, The Crying Game, Empire of the Sun and Spider . Television work includes A Dance to the Music of Time, Jackanory , Queen Elizabeth in Blackadder and Queen Mary in The Lost Prince . Stage plays range from Old Times to The Changeling.