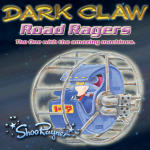 Far away in a distant galaxy, the battle between Kat and Muss is about to begin, for one evil Kat, Dark Claw, is intent on destroying the entire Muss civilisation! It is time for the brave young Muss warriors, Onlee One, Hammee and Chin Chee, to put their unique powers to the test...

Dark Claw has a new and unpleasant assistant in his battle againt the Muss. Her name is Ratuschka - a hideous back-stabbing rodent if ever there was one... Have Onlee One and his two faithful companions met their match?

Shoo Rayner is the author of over 100 books. He has also illustrated many books for other authors, including Michael Morpurgo, Michael Rosen and Rose Impey. He lives in the Forest of Dean, in the darkest corner of England, with his wife, two children, two cats and a pond full of single-celled creatures. He is in much demand for his story-telling skills, which he brings to this exciting recording.