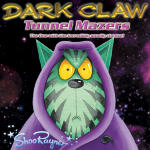 Far away in a distant galaxy, the battle between Kat and Muss is about to begin, for one evil Kat, Dark Claw, is intent on destroying the entire Muss civilisation! It is time for the brave young Muss warriors, Onlee One, Hammee and Chin Chee, to put their unique powers to the test...

Dark Claw has a nasty surprise planned for the residents of Planet Muss: Fworgonzola - the smelliest substance in the known universe... Can Onlee One and his chums sniff out his pongy plan in time?

This is the audio version of this much loved series, performed by the author in his own inimitable way. Shoo is the author of over 90 books for children. He visits schools and libraries regularly were his story-telling skills are in much demand.