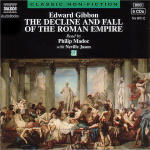 Decline and Fall of the Roman Empire, The

Gibbon's The Decline and Fall of the Roman Empire is one of the greatest texts in the English language. In magisterial prose, Gibbon charts the gradual collapse of the Roman rule from Augustus (23BC-AD14) to the first of the Barbarian kings, Odoacer (476-490 AD). It is a remarkable account, with the extravagant corruption and depravity of emperors such as Commodus, Caracalla and Elagabalus contrasted by the towering work of Constantine, Julian and other remarkable men. It remains the standard work of scholarship on the subject two hundred years after it was written; yet equally important, in its sheer accessibility, it is an unforgettable story.

Chapters I-XI (98 - 268 AD)
Edward Gibbon begins The Decline and Fall of the Roman Empire by setting the scene at the time of Augustus, the first emperor of Rome and describing the extent of the empire. It was a crucial time - in his last testament, Augustus advised that the Roman Empire should be contained within the geographical limits attained at the time. Britain had been added, and the period of active aggrandisement was over.

He passes rapidly over the following reigns, including the periods of Tiberius, Caligula, Claudius I, Nero and Trajan, and concentrates on the 43 years of order and justice maintained during the administration of the Antonines, Antoninus Pius and Marcus Aurelius.

This was followed by the indulgence and cruelties of Commodus, succeeded, in his turn, by the virtuous Pertinax, whose brief reign was cut short by one of the first real displays of power by the Praetorian Guard. Thereafter, Septimus Severus introduced the dangerous pattern of mollifying the Praetorian Guard, which played a disproportionate part in the vicissitudes of the empire.

A further period of licentiousness and despotism followed with the extravagances of Caracalla and Elagabalus. After another all-too-short period of peaceful rule under Alexander, the empire was ruled by the tyrannical Maximin, and five others who all died within six months. This part of Gibbon's account concludes with the accession of Claudius II in AD 268.

Chapters XI to XVII (268 AD - 334 AD)
In this section, Gibbon continues his masterly survey by looking at some of the strongest figures in Roman history. There were four years of memorable achievement under Aurelian, and the "illustrious" joint reign of Diocletian and Maximian when administrative sense and order prevailed over the Western and Eastern empires. It was a time, also, which saw the end of Rome as the effective capital of the empire.

The sensible partition of power was not to last for long. From a period of turmoil, Constantine emerged to rule on his own and eventually set up a new capital on the banks of the Bosphorus - Constantinople.

It is also in this section that Gibbon considers the growth of Christianity and the early Christian Church. His account questioned the established views towards the Roman persecution and aroused the ire of Gibbon's contemporaries despite its scholastic basis. The historian himself stood by his comments that the persecution of the Christians was neither as extensive nor, in political terms, as inappropriate as was generally accepted.

Chapters XVIII - XXXVI (323 - 490 AD)
The reign of Julian was short (361-363), yet Gibbon devotes no fewer than three chapters to his personality and achievements. Frugal, even austere in his habits, Julian began as a philosopher and ended an emperor on the battlefield, and, through Gibbon's eyes, emerges as one of the most impressive in the catalogue of Roman rulers.

But neither he, nor other able rulers such as Theodosius, could do more than momentarily halt the decline of the Roman Empire. The incursions of the barbarians, including the Goths under Alaric (leading to the first sack of Rome) and the Huns under Attila, sounded its death-knell.

This account ends with the reign of Odoacer, the first barbarian king of Italy.