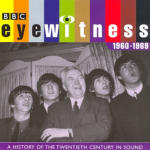 Authentic voives from the past illustrate this unique history of the Twentieth Century, written by Joanna Bourke and presented by Tim Pigott-Smith

Eyewitness provides a rare and fascinating opportunity to hear the events of the century described by those who saw them happen. A wealth of BBC archive recordings, some never previously broadcast, is interwoven with an Illuminating commentary by the historian Joanna Bourke. Published in ten volumes, Eyewitness examines the role and the life of the British people in each decade of the century.

The Sixties is one of the landmark decades of the 20th Century. An era of profound social revolution, it created, for good or ill, the permissive society. A repressive, paternalistic culture gave way to greater individual freedom and it was a good time to be young.

But although London was swinging, economic crises, cold war fears, industrial strife and an emerging drug culture dampened the optimism. By the end of the decade, man may have reached the moon, but in Northern Ireland discrimination and the revival of ancient hatreds had erupted into sectarian violence.

Thought-provoking and moving, these are the voices of the past, speaking to the present.