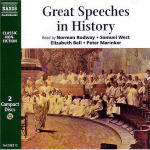 From Socrates to Charles I, Danton to Lincoln - here are some of history's most significant figures with their most important speeches. Fighting for justice, for freedom of speech, and sometimes even for their own lives, these orators demonstrate the finest resources of languge in the service of the most dramatic issues of their day.

In the age of the nine-second soundbite - reportedly now the average length of time a US presidential candidate has to present his or her views on a particular issue via a television broadcast - it may seem indulgent to offer a selection of great speeches, some of which lasted several hours in their original format. Do we still have subjects that stir the emotions as powerfully as those which gave rise to the speeches performed here?

It might be equally argued, however, that the preservation of some of the finest forms of argument ever made is a moral duty for without knowing our past we are condemned to repeat its errors. What matter that today's speeches are, by and large, poor shadows of those of former times? Occasionally we are startled from complacency and are moved by a politician doing his or her best.

The speeches selected here are all, in a broad sense, politically motivated, in that they were given in circumstances in which the orator found him or herself pressed to speak in the hope of bringing about change in the public world. This is perhaps as it should be; the speech is by definition a public performance, an attempt to persuade the audience of the orator's point of view, having gained their attention in the first place.

If there is a unifying theme to this selection, then it is the suggestion that each of these speeches was given at a crossroads in history Sir Thomas More's speech might be said to have put the final touch to the end of the supremacy of Rome over the Church of England. It is perhaps less evident with some of the other speeches that any turning point was being marked by their particular words on that especial occasion; but turning points of history can be moments when opportunities for change for the better are lost, as well as grasped.

Thomas Babington Macaulay, the 19th-century writer and politician, and no mean speech-maker himself, said that "the object of oratory alone is not truth but persuasion. " It is not for me to judge the truth or otherwise of the speeches here, but each of them, in different ways, demonstrates the truthfulness of Macaulay's assertion. Even Charles I, moments before his execution, is determined to persuade his listeners of the validity of his own position.

"Let thy speech be short, comprehending much in few words, " is the exhortation in Ecclesiastes. No more then, except to hope that more of our contemporary orators might argue a little more, and assert a little less.