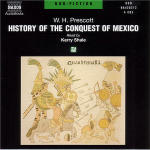 History of the Conquest of Mexico

In 1519, Hernando Cortes arrived in Mexico to investigate stories of a wealthy empire. What he encountered was beyond his wildest dreams - an advanced civilisation with complex artistic, political and religious systems (involving excessive human sacrifice) and replete with gold. This was the Aztec empire, headed by the aloof emperor, Montezuma. With just a handful of men, Cortes achieved the impossible, crushing the Aztecs and their allies, and effectively annexing the whole territory for Spain. One of the most extraordinary stories of conquest in mankind's history, it is told here in the classic account by the American historian W.H. Prescott.

William Hickling Prescott's monumental History of the Conquest of Mexico is a classic work of its genre, worthy to stand by the side of Gibbons's Decline and Fall of the Roman Empire. It is a work of the minutest scholarly investigation; every available source has been consulted, some acquired with the greatest difficulty from obscure libraries and museums throughout the world, not excluding Mexico itself. Ancient maps and artefacts have been pored over, weighed and considered, and the whole distilled into seven books which never lose for one moment the vivid thrill, nor the epic dimension of this amazing story. The work involved in producing this book is staggering for any human being to contemplate, but the achievement seems almost unbelievable when one knows that the author was blind. Prescott, in writing and researching this epic tale, therefore had his own personal conquest to achieve; to rise above and defeat his handicap. His victory is self-evident, and is nothing less than a triumph.

Prescott was born into a prosperous old New England family in 1796. In 1811 he entered Harvard where he proved to be an average and unremarkable student. High spirits in the student common room resulted in a crust of bread being thrown and hitting Prescott in the left eye, causing virtual blindness. A weakness in his right eye was exacerbated by infection, so that he was often unable to study at all. For the rest of his life, Prescott struggled with varying degrees of sight, ranging from partial to total blindness. He was helped in his studies by the invention of the noctograph, a writing grid with parallel wires that guided a stylus over a chemically treated surface. A large proportion of his books were completed with this machine.

The 'History' was published in America in 1843, a time when slavery was an accepted institution in some states, and Prescott's countrymen were 'conquering' and expanding towards the West. Yet Prescott manages to retain an objectivity on these subjects, so much a feature of his 'History'. He does not wish to distort the facts to fit a preconceived idea of his own (as some modern historians have done), nor does he wish to write solely to satisfy the moral climate of his age. He is, of course, intent on showing the good effects of the civilising influence of the Spaniards, and the defeat of a 'barbarian' culture through the benefits of Christianity, as one would expect of a 19th century historian, but he is no zealot. He praises the calm and systematic approach of Father Olmeda to the conversion of the Indians, whilst firmly criticising those Spaniards who would willingly have put the whole Aztec nation to the sword in the name of Christ. One wonders what he thought of the American suppression of the Native American Indians which began during his lifetime.

Prescott tells his story simply, as an unrelenting narrative, with very little of his own comment. The first five books, which recount the early history of Mexico, the Aztecs and their culture as well as the arrival of the Conquistadors, and their subsequent subjugation of the country, are constructed with all the skill of a Shakespearian five-act Tragedy, with Hernando Cortes as the dramatic, if not actually tragic, hero. The central dramatic conflict, between the pusillanimous and vassilating monarch Montezuma,

emasculated by decadence, and the gritty, energetic Cortes, unwaveringly confident in his destiny, is clearly defined by Prescott. The events after their initial meeting chart the rise and fall of these two opposing characters as much as the defeat of a nation. Prescott contrives that we often learn of these events at the same time as Cortes, which reinforces Cortes' role as the central epic hero. Indeed, it seems at times as if he is undertaking the conquest single-handedly, as in his attack on the Indian commander at the battle of Otumba, when he effectively saves the future of the expedition. By focusing on Cortes, Prescott is at times able to reduce the epic scale of his narrative as we enter into the Commander's mind and share in his struggles and decisions.

But it is the epic proportion of the narrative, the broad sweep of history, rather than the detail, that we remember from this book. Prescott never allows the story to flag, employing vivid and colourful imagery in describing the spectacular set pieces of the book, the processions and the battles. He conveys a sense of movement in his battle scenes, the balance of attack and retreat, at times reaching almost poetic flights of description that begin to read like a novel. Indeed, there are moments in this incredible story when it does seem like fiction, and Prescott does not fight shy of painting a graphic picture for us: the confused melee of Spaniards and Indians trapped in a canal on the noche triste (the melancholy night) the ritual of human sacrifice, the final moments of Aztec resistance - all stay vividly in our minds.

He shows the skills of a novelist, too, in peopling his story with contrasting minor characters: the wily Velazquez, Governor of Cuba; the ineffectual Narvaez; the hostile XicotencatI, and the over-compliant IxtlilxochitI who, Prescott adds wryly, 'contributed more than any other chieftain... to rivet the chains of the white man round the necks of his countrymen'. Prescott had a most vivid imagination sharpened no doubt by the deprivation of his sight. His 'History' concludes in his usual rational way: that the Spaniards were no worse or better than any other conquering nation, and the Aztecs, debilitated by their savage customs and superstitions, were in need of civilising. It may be a debatable point today but Prescott re-establishing his neutrality reminds us that we should judge by the standards of the age in which they lived -the voice of the true historian. Prescott's skill in blending spectacle with hard fact produced a classic that is still in print today and its continuing appeal is perhaps best summed up in his own words: it is, he said, 'an epic in prose, a romance of chivalry'.