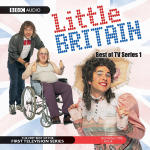 'The pair are the undisputed kings of TV comedy...' --- The Guardian
'The show's become a proper phenomenon' --- Heat magazine

'Britain, Britain, Britain. Land of tradition, fish and fries, the changing of the garden. Have you ever wondered about the people of Britain? Neither have I... '

In these highlights of the first BBC TV series, Lou takes Andy to the opera - 'I don't like it!', to the pet shop - 'I want a rabbit!' - and on holiday to Helsinki - 'I want to go to Florida!' Lou also offers to paint Andy's bedroom: 'Now, are you sure you want red... ?'

Unconvincing transvestite Emily Howard, or rather Eddie Howard, turns mechanic, and goes for a stroll along the prom (as ladies do). Ray McCooney's tax payments are overdue, but can he give a cheque today? 'Mebbe I can and mebbe I can't...'

At DIY Universe, Des Kaye - "Wicky woo!' - is hard at work, while Sam Bailey has a driving lesson in the Duchess with an unusual driving instructor. Yesterday's test on crisps at Kelsey Grammar School does not make for happy reading: There is no such flavour as Prawn Collymore', and there's the scariest babysitter you've ever heard.

With Tom Baker's nonsensical narration, and guest-starring David Soul, 'I think it's fair to say that this is arguably the finest series ever broadcast Good bybe!'