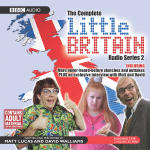 Thanks to the comic genius of Matt Lucas and David Walliams, the writers and stars of Little Britain, we've all asked a friend to look into my eyes', or proclaimed 'I'm a lady!' to a colleague, or even suddenly announced 'I am the only gay in this village'. Here, complete and uncut, are all four episodes of the second radio series.

For this audio, both stars have helped garner over thirty minutes of exclusive extras that include outtakes and sketches that have never been broadcast - as well as a specially recorded interview with Matt and David.

Winner of a Sony Radio Academy Award, it's no wonder this series was described by Heat magazine as 'comedy ecstasy, even without pictures'.