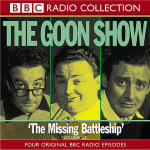 Goon but not forgotten! From 1952 to 1960 the Goons ruled the airwaves, the most celebrated and influential clowns in the history of radio.

So GO ON - join junk king Neddie as he tries to salvage the world, go in hot pursuit of Fire Chief Seagoon when he blazes a trail to old Peking (he has a burning ambition), sail the seven ponds with bold pirate Captain Jim 'Bilge' Moriarty, and help Stock Market runner Seagoon save the pound (it's a sterling effort).

And what is the message written on the soles of their feet? It's a footnote.