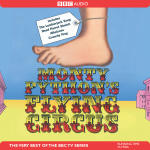 The very best of the television series, featuring all the favourite sketches.

Perhaps the ultimate in TV comedy madness and absurdity, this cult series, which began in 1969, was conceived, written and performed by Graham Chapman, John Cleese, Eric Idle, Michael Palin, Terry Gilliam and Terry Jones. It was innovative and ground-breaking comedy which inspired many of today's writers and performers.

The skits, songs and catchphrases are legendary, from the memorable Nudge Nudge WinkWink to the celebrated Dead Parrot Sketch.

This release features nineteen of the best sketches, including the hairdresser with a fear of hair who really wanted to be a lumberjack in Barber Shop Sketch and the Lumberjack Song, the leading figures from the Third Reich who fetch up in a B&B in the West Country in Mr Hilter and The North Minehead By-Election, and the famous composer ArthurTwo Sheds who only has one shed but did once think of getting a second. Albatross, Self-Defence, Flying Sheep and Crunchy Frog also feature among many other timeless classics.

The Monty Python team came together in 1969; Barry Took, then working as a freelance producer, acted as consultant between them and the BBC. 'Python started as a result of all of us deciding we were fed up with the shows we were writing for', explained Michael Palin, those shows including The Frost Report and Do Not Adjust Your Set.

The six writers -John Cleese, Graham Chapman, Michael Palin, Eric Idle, Terry Jones and Terry Gilliam - were influenced by the comic genius of Spike Milligan. Terry Jones described watching Spike's show Q5 and realising that not all sketches had to have a beginning, a middle and a tag-line. That they refused to be slaves to the punch line made Monty Python unique television comedy.

The first series ran from October 1969 to January 1970. Predictably the BBC were wary but with a positive critical reaction, a second series was scheduled from September to December l970. The first show in that series contained one of the most celebrated Python sketches, The Ministry of Silly Walks. By now the show had achieved cult status and in 1971 the team released a film version of highlights, And Now For Something Completely Different.

By the third series the humour had become increasingly off-the-wall. For the fourth and final series, which began in October 1974, the title of the show became simply Monty Python. The team then split up to pursue individual projects (John Cleese had left at the end of the third series to write Fawlty Towers. ) In 1975 they reformed to make Monty Python and the Holy Grail and then in 1979 came the highly controversial box office smash Monty Python's Life of Brian. Their fifth film, The Meaning of Life, came out in 1983.

The forty-five episodes and five films made by the Python team did for television comedy what The Goon Show did for radio: it turned the concept of comedy upside down. The lunatic random sketches held together by Terry Gilliam's surreal animated links heralded a new generation of humour and the show will always be regarded as a classic.

2 A Man with Three Buttocks