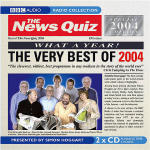 The News Quiz, the best topical comedy radio panel game in the world, has been making the headlines since its inception. Hugely successful in its own right, it also provided the inspiration for the television hit Have I Got News For You.

Keeping order over the proceedings is chairman Simon Hoggart, who picks some of the most memorable moments from the years 2003 and 2004.