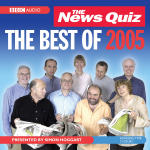 'The cleverest, wittiest, best programme in any medium in the story of the world ever'. --- Chris Campling, The Times

'Hello, and Welcome to The Best of News Quiz 2005. As you know, momentous events have been taking place around the globe. Our panel, however, prefer to concentrate on the small, the amusing and the trivial... '

So begins Simon Hoggart's introduction to the most memorable moments on The News Quiz from October 2004 - March 2005. As chairman he attempts to keep order over proceedings in the incredibly popular and topical radio panel game which has been making the headlines since its inception. Hugely successful in its own right, it also provided the inspiration for the television hit Have I Got News For You.