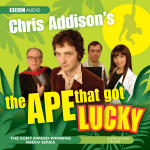 Chris Addison's the Ape that got Lucky

This is the Sony Radio award wining Radio 4 series from Chris Addison, which precedes Civilization.

The four episodes are called Language and Communication, Social Development, Science and Technology, Man or Monkey.

The title features the same cast as the August released Civilization with Chris Addison as the lecturer with Professor Austin Herring played by Geoffrey "Hitch Hikers Guide" McGivern and lecture illustrations by Jo Enright and Dan Tetsell.

The series explores the fascinating subject of human evolution, firstly looking at the first advantage Mankind has over poor saps, 'The Animals', Language.

We look at the number of languages now in use (5,000 or so) and why the people of Lewisham don’t seem to have chosen one as yet.

Amongst other things, professor Herring demonstrates his value based translation machine, and we meet a man who thinks his bees are telling him about unsolved crimes.

Chris Addison has now won two Perrier nominations and the Sony radio Award for this series.