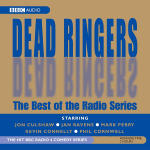 Dead Ringers - The Best of the Radio Series

The Archers goes interactive, Ruth gets some bad news {'Oh nooo!'} and Brian 'Hard Man' Perkins takes on The Weakest Link's Anne Robinson - and wins. Patrick Moore books a taxi to Uranus for a very reasonable five dollars, Charlotte Green gets sexed-up -("is that a gun in your pocket or are you just pleased to hear me?") - and Doctor Who calls directory enquiries in his search for The Master, and then phones himself - twice!

Among your other favourites coming under fire in this comical collection are George W. Bush - and his search for Saddam's 'Penguins of Mass Destruction' - Rolf Harris meets Droopy in Cartoon Animal Hospital, Zippy from Rainbow tries Faking It as Cherie Blair, and You and Yours celebrates 1,000 years of broadcasting.

There's a new reality show to end them all (Desert Island Discs, featuring a real castaway on a desert island), and the Queen appears on Royal Brain of Britain...

Celebs take cover - these superb sketches are the finest moments from Dead Ringers.