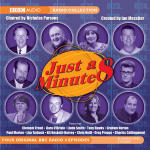 Just as uproariously funny and terrifically popular today as when it first began, Just a Minute has kept us consistently entertained, as a wealth of celebrated and talented panellists attempt to tackle a vast array of diverse subjects for a minute without repetition, deviation or hesitation.

Among such diverse subjects being tackled hopefully - but often hopelessly - are: DJs, crabs, fake tans, shorts, weeds, teenagers and who's the best dressed member of the panel.

Seconds out, let timely battle commence in these classic episodes which are much, much more than a laugh a minute.