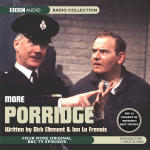 -A Night In (19 September 1974) Godber is moved into Fletch’s cell, and confides that he finds it tough each time the door bangs shut. Fletch advises him to think of it as ‘a quiet night in’: but the trouble is, Godber has 698 more nights to get through.

-Heartbreak Hotel (31 October 1975) Godber has an uncharacteristically violent episode after receiving a ‘Dear John’ letter from his fiancée Denise. Fletcher tries to help him – but Fletch’s daughter Ingrid proves more of a consolation.

-The Harder They Fall (21 November 1975) Godber’s been chosen for the boxing team, so naturally everybody wants a bit of a flutter. When rivals Grouty and Billy Moffatt both want to fix the fight different ways, only Fletch looks like coming out the winner.

-Disturbing the Peace (7 November 1975) With Mackay away on a course, the prisoners plan to have some fun – but it turns out his replacement, Wainwright, is even worse. His excessive discipline causes a riot, and it’s left to Fletcher to sort out the situation.