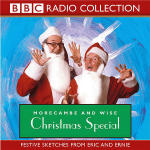 'The greatest double act in the history of British television... ' --- The Independent

Morecambe and Wise are one of the most popular and enduring double acts from the golden age of television. With viewing figures constantly in the millions, their Christmas specials became a national Institution.

These classic television sketches from the years 1969 to 1975 feature a host of guest stars including Eric Porter, Fenella Fielding, Ann Hamilton, Peter Gushing, Glenda Jackson and Des O'Connor (who else?). There is the classic Grieg's Piano Concerto with Eric as soloist, conducted by Mr Andre Previn/Preview, and also Eric turning up at the flat with a giant Christmas tree taken from Trafalgar Square ('we were very lucky, there was only one left').

With the duo's inimitable style of delivery and repartee, it's not surprising that a BBC poll saw Morecambe and Wise voted 'Best Light Entertainment Performers of All Time'.

This is the very best of Eric and Ernie's festive fun.