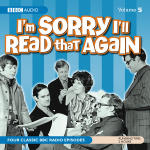 I'm Sorry I'll Read That Again was the legendary forerunner of many comedy shows - including The Goodies and I'm Sorry I Haven't a Clue - and starred Tim Brooke-Taylor, John "Otto" Cleese, Graeme Garden, David Hatch, Jo Kendall and Bill Oddie.

As employees of the outrageously madcap Radio Prune they garnered a huge following and had the audience - as well as the nation - in hysterics week after week.

Billed as "a radio custard pie", it served up regular helpings of songs, sketches and satire from 1964 to 1973 and was described as "A kaleidoscope of funny voices, catchphrase and innuendo revolving at breakneck speed."

It's anarchic, irreverent, and as outrageously funny as ever.