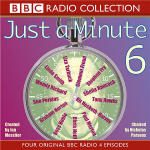 In this selection of four editions from 2002, Chairman Nicholas Parsons once again attempts to keep control over the most devious of panel games - as well as over panellists Clement Freud, Paul Merton, Liza Tarbuck, Stephen Fry, Sheila Hancock, Graham Norton, Tony Hawks, Wendy Richard, Sue Perkins, Ross Noble, Linda Smith, Chris Neill and Kit Hesketh-Harvey as they pit their wits - and their words - against the clock.

As they attempt to speak for sixty seconds without repetition, deviation or hesitation, the subjects covered range from Crow's Feet and Laundrettes to Furry Dice and Faith Hope and Charity. Eloquence, wit, imagination and a sharp ear are the qualities required for the game - and the hilarious results are here for all to enjoy.