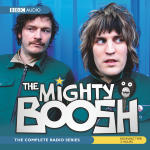 'It's as novel as Knowing Me, Knowing You or The League of Gentlemen were in their day... the real thing's never hard to spot, and The Boosh is it' -- Daily Telegraph

Noel Fielding and Julian Barratt are The Mighty Boosh and together they write and star in their first radio series which won the Douglas Adams Award for Innovative Comedy Writing. Here are all six episodes of the BBC Radio 4 series, complete and uncut, from the winners of the Perrier Best Newcomer Award.

Welcome to the surreal world of Zooniverse where two zookeepers Howard Moon (Julian Barratt) and Vince Noir (Noel Fielding) embark on an array of magical and bizarre adventures that include a trip to the Arctic tundra to find a lost egg, an expedition deep into the jungle and being trapped inside a hitchhiker's box. Feel the bracken, isolate the crisps and calm your llama down with some blue pants - this is a madcap style of music and mayhem which sounds mighty like The Boosh.

Described by the Observer as 'Some of the most inventive comedy writing of the decade', and eliciting an exclamation of 'Wow!' from Simpsons' creator Matt Groening, come with us now on a journey through time and space - to the world of The Mighty Boosh..,