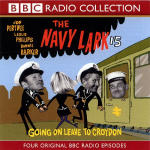 Four Classic Episodes of Nautical Mayhem on Board HMS Troutbridge.

All at sea in the Senior Service were Stephen Murray's Number One, Petty Officer Jon Pertwee and silly-ass Sub-Lieutenant Leslie Phillips, whilst below decks Ronnie Barker worked his passage as (Un)Able Seaman Johnson.

So climb aboard and join the merry crew in these four classic capers, as CPO Pertwee buys some really superior scrap metal at a bargain price, Heather breaks off her engagement to Sub Lt Phillips, Fatso's steak-and-kidney pies give cause for concern in port, and matters come to a head between Heather, Phillips and Pertwee over the small matter of a railway pass for Croydon...