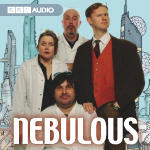 It is written by talented writer/actor Graham Duff, writer of BBC TWO's Dr Terrible's House Of Horrible and Combat Sheep.

The year is 2099. And in a post apocalyptic England, things will never be the same again. Cattle-clasm has wiped out the majority of our livestock, the year has been restructured to include new months such as Octember and Janril, and there's even a new season: Hamble, which falls between Spring and Summer and is generally drizzly.

Meanwhile, Professor Nebulous - a brilliant, if eccentric eco-conscious scientist - is determined to get Mother Earth back on the right track. Nebulous runs an eco-trouble shooting organisation called K.E.N.T. (which each week stands for something different). Sadly, the organisation is so woefully underfunded, they have to subsidise their work by running a launderette.

Nevertheless, Nebulous (played by Mark Gatiss) must pit his wits against whatever challenges the Earth's distorted eco-system throws at him. Be it sentient Dust, killer Cacti or Garrow - a new colour which sends people insane. However, Nebulous's work is continually undermined. Often by the ineptitude of his own team...

Paula Breeze (Rosie Cavalero) is over enthusiastic and under qualified. She's utterly infatuated with the oblivious Nebulous and is continually engineering ways to make her feelings known.

Rory Lawson (Graham Duff) is a man of action who lacks both brain and brawn. A would-be ladies man, Rory has problems with authority.

Harry Hayes (Paul Putner) is K.E.N.T.'s tactical equipment specialist. He travels around in a cumbersome wheelchair, cobbled together from kitchen units. And the volume of his electronic voice is way too loud, causing everyone to grit their teeth.

Nebulous himself is a troubled man. He frequently experiences flashbacks to his embarrassing childhood, reared by parents working as clowns, unable to comprehend his scientific genius. Nebulous is further hampered by rival ecological trouble-shooting organisation L.O.U.G.H.B.O.R.O.U.G.H. A flashy, heavily funded outfit headed by his ex-lover, the arrogant Dr. Erica Moody and her dim, muscle bound body guard Craig. As Nebulous points out; the people of LOUGHBOROUGH have always hated anybody from KENT.

Nebulous is produced by Baby Cow and is the company's first production for Radio 4.

Henry Normal, co-founder of Baby Cow, says: "We are proud that Baby Cow Productions has now become part of the fine tradition of comedy on BBC Radio".

Steve Coogan, also of Baby Cow, added: "Nebulous is such a vast comic world... it can only be contained on radio. With this kind of budget".