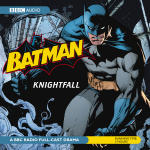 "... Dirk Maggs, who wrote and produced, threw everything into the pot and stirred vigorously. The result was richly textured, highly flavoursome, original and wonderfully energetic ..."   Daily Telegraph

Gotham City is reeling from the shocking news that Batman is confined to a wheelchair. Who will now protect the innocent from the dangerous inmates of Arkham Asylum, whom Bane has released? A new hero - Asrael - takes up the mantle of the Bat. But Azrael is a more brutal Batman than Bruce Wayne, and far more eager to punish the guilty than to protect the innocent. Will he destroy Gotham City in order to save it?

This fantastic full-cast adventure stars Bob Sessions, Michael Gough, Peter Marinker and Kerry Shale, and it comes from the renowned producer Dirk Maggs, of Superman and The Hitchhiker's Guide to the Galaxy radio fame.

This stunning audio production was first aired on BBC Radio 1, and it's cliffhanging, all-action adventure can now be heard uninterrupted and remastered - complete with dazzling sound effects and specially composed orchestral music. This edition also includes a bonus out-takes reel, never heard before.

Dirk Maggs is a genius!

Why there aren't more superhero-based pieces on audio is beyond me. Thank God for Dirk Maggs! "Batman: Knightfall" never lets up, and is a perfect adaptation of the sprawling Batman saga of years ago. All we need now is for the BBC to re-release all of Maggs' sci-fi and comic book masterpieces.