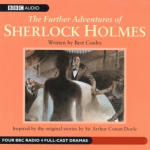 How many times did Dr John Watson tantalise us with passing reference to a mystery which his creator, Sir Arthur Conan Doyle, never wrote about in full? In these full-cast original adventures Bert Coules, the chief dramatist of BBC Radio 4's celebrated complete Sherlock Holmes canon, has imaginatively fleshed out four such unrecorded cases.

The Madness of Colonel Warburton - Watson's old CO. faces ridicule and ruin for his beliefs. But is it possible that he truly can speak to the dead?

The Star of the Adelphi - In a case full of deceit, delusion and theatrical pretence, Sherlock Holmes is most baffled by the vanity of a woman.

The Saviour of Cripplegate Square - As Holmes recounts one of his most chilling cases, Watson learns some fascinating facts about his friend's early career.

The Singular Inheritance of Miss Gloria Wilson - A jealous policeman, a lump of mud and a man who goes back for his umbrella all figure in a thirty-year-old mystery.