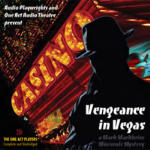 DONT MISS THE FIRST CASE IN THIS SERIES: "A DEAD BODY'S A DEAL BREAKER".