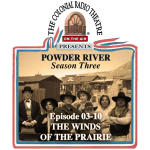 POWDER RIVER - Season 3. Episode 10 THE WINDS OF THE PRAIRIE