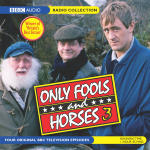 Only Fools and Horses 3

Viva Hooky Street! Del, Rodney and the boys are back in another pukka selection of shows.

In Homesick, Rodney is elected Chairman of the local Housing Committee, and Del Boy persuades him to use his position to get them all ground-floor accommodation. Healthy Competition sees Rodney deciding to open a rival business - in partnership with Mickey Pearce! The brothers attend Grandad's funeral in Strained Relations - and among the mourners is Uncle Albert. When the wake is over, Del Boy lets the old sea dog stay the night, but his residency soon becomes more permanent. And in Hole in One, the Trotters have fallen on hard times, so when Uncle Albert falls through the cellar door in the pub, they decide to sue. But was Albert's fall really an accident? You'd be a plonker to miss these comic classics!