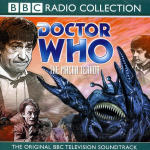 Doctor Who - The Macra Terror

There are some corners of the universe which have bred the most terrible things ... they must be fought, ' The Doctor

In 2070 Earth's weather is controlled by the Gravitron, a device based on the Moon and manned by an international team of experts. When the TARDIS deposits the Doctor and his companions on the zero-gravity surface, they discover the base in the grip of a plague epidemic which is drastically reducing the personnel.

The Doctor's curiosity is aroused by the mysterious infection. With the base's own medic himself incapacitated, the time traveller offers his services to the ailing crew. Can he pinpoint the source of contamination before time runs out? Jamie, meanwhile, is recovering in the Sick Bay from a blow to the head. In his delirium, can that really be the Phantom Piper coming to haunt him - or is it something far more deadly?

Soon an invasion force from Mondas descends, its aim to take control of the Gravitron and decimate Earth's population with waves of extreme weather. All remaining humans will be converted to the Cyber race...

When the Doctor, Polly and Ben visit a human colony that appears to be one big holiday camp they think they have come across a truly happy place. But a shadowy presence soon makes them realise that the surface contentment is carefully controlled. The colony's inhabitants have been brainwashed by giant crab-like creatures - the Macra. Insidious propaganda, broadcast by the Controller, forces the humans to mine a gas that is essential for the Macra to survive - but fatal to them.

The colony must be saved - but how? The Doctor and his team are up against It, particularly when Ben falls under the influence of the Macra. Can he be rescued from their evil clutches? Can the gas pumping equipment be destroyed, getting rid of the Macra for good?

The soundtrack to this suspenseful adventure, which was first broadcast In 1967, has been digitally remastered to recreate a very popular story from the Troughton era.