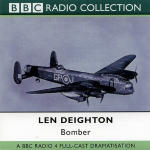 It is 18 February 1943, and RAF Lancaster bomber WF 183 - call sign O-Orange - is about to set off on its final mission. It is a raid which will touch the lives of hundreds: the civilians in the small German town of Altgarten, consumed by blazing fire, and the crews, both German and British, men and women.

it is a night of horror that few will forget...

When the gripping dramatised version of Bomber was first broadcast on BBC Radio 4, it was transmitted in 'real time' throughout the day, to incredible critical and audience response.

Bomber is a thrilling, action-packed and ultimately poignant story that will stay in the listener's imagination for a long time to come.