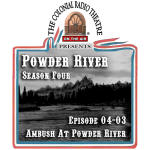 A young lady is the sole survivor of an Indian attack on a raft traveling on the Powder.