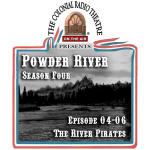 Britt takes on the river pirates who have been attacking boats and homesteads along the Powder.