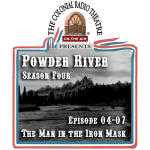 POWDER RIVER Season 4. Episode 07 THE MAN IN THE IRON MASK

THE MAN IN THE IRON MASK

A mysterious visitor takes a room at Millie's Hotel.