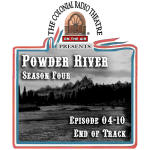 Tragedy and death strike Clearmont, in this, the most dramatic episode of the Powder River series. This concludes Season 4.

I listen at work on XM. I just stopped working, staring at my MyFi, and listened with tears coming down my face. So, powerful! The cast has outdone themselves again, what an amazing production. This entire season has been gripping and entertaining that you truly think you are in Clearmont with the entire gang. Great episode and season!