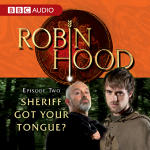 The Sheriff of Nottingham is determined to punish Robin for his defiance of authority.

He holds the villagers of Locksley hostage, threatening to cut out a villager’s tongue every hour until Robin is found. Robin has no choice but to give himself up to protect them. But with his gang of outlaws on his side, all is not lost…