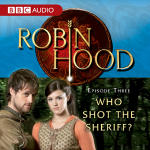 When a mysterious sniper begins to murder the innocent people of Nottingham, the Sheriff is quick to blame Robin Hood.

To stop the killings, Robin must work with the Sheriff to discover the true identity of the murderer. Is it really the elusive Nightwatchman? And can the Sheriff really be trusted?