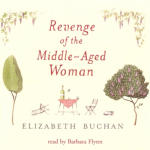 Revenge of the Middle - Aged Woman

Rose Lloyd was the last to suspect that Nathan, her husband of over twenty years, was having an affair, and that he was planning to leave her. But the greatest shock was yet to come, for his mistress was Rose's colleague and friend, Minty.

So Rose was left alone in their once-happy family home, where she and Nathan had brought up their children. Then she started thinking — about the man she'd married, and how well she really knew him. About the carefree yet studious girl she had been before she met him. Twenty years ago Rose had to make the choice between two very different lives. Could she recapture what she nearly chose back then, and bring new meaning to her life now?

' Wise, melancholy, funny and sophisticated, Buchan's new novel is more satisfying than a romance ' — The Times

'A finely written, highly intelligent romance, without any of the slushiness usually associated with the genre ' — Mail on Sunday

Barbara Flynn has worked steadily across stage, film and television, most notably as Jill Swinburne in the Beiderbecke trilogy , Robbie Coltrane's wife in Cracker , and Mary Queen of Scots . She featured regularly in Open ALL House and appeared alongside Bill Paterson in Sea of Souls . She has acted on many prestigious theatre stages, including the National , the Gate in Dublin , the Sheffield Crucible and the Donmar . She is a frequent reader and actor on BBC Radio.